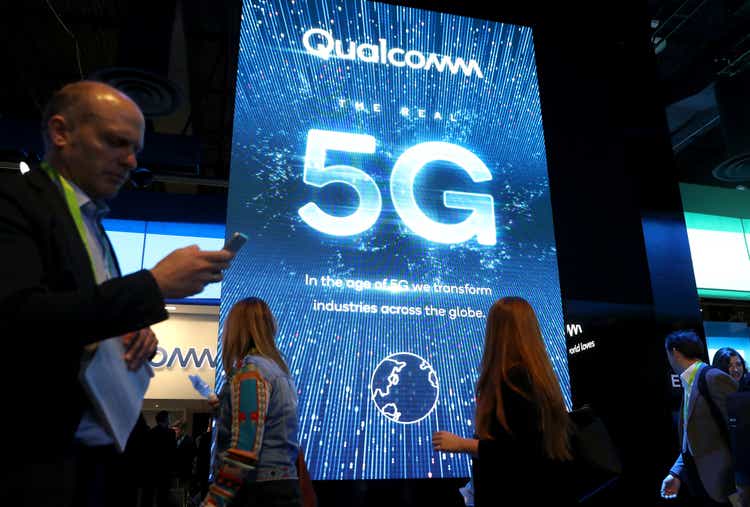 Qualcomm (NASDAQ:QCOM) is a leading semiconductor chip designer which has developed state of the art 5G enabled chips for popular smartphones such as the Samsung S22. The company is leveraging their expertise in 5G chips and wireless technology to attack multiple markets. At QCOM’s Investor day they estimated the market size of all these opportunities combined to be a ginormous $700 billion. This may seem like a “pie in the sky” but NVIDIA (NVDA) announced a $1 trillion opportunity at their GTC keynote presentation. Qualcomm has started strong recently smashing earnings estimates for Q2,22. While simultaneously the backdrop of rising interest rates and supply chain disruptions have caused a bloodbath for tech stocks. Wall Street has been ruthless to any minor blip in a company’s growth. Thus we have seen major declines in Netflix (NFLX), Meta (FB) and even Amazon (AMZN). Qualcomm’s share price has slid down by 28% since January 2021, leaving the stock price at a similar level to October 2020 ~ $135/share. According to my discounted cash flow model the stock is currently undervalued. Thus given the aforementioned tailwinds, this could be an opportunity to invest into “G.A.R.P” Growth at a Reasonable Price. Let’s dive into the market opportunity, the financials and valuation for the juicy details.

Qualcomm is most famous for being a leading chip supplier for cell phone companies such as Samsung, Huawei and they even provide modem chips to Apple. Handset revenue made up ~65% of their revenue and grew by 56% in Q2,22. While, IoT makes up 17.7%, RF Front End (12.5%) and Automotive makes up 4.2% of their revenue.

Qualcomm is generating rapid growth across all business segments. Their core handset segment grew revenues by 56% in Q2, compared to the same quarter last year. This growth was driven by an increase in volume for the (Snapdragon 8 chip) which now powers 75% of the Galaxy S22 Series, up nearly double from the S21. Handset growth was also driven by major traction in China with Xiaomi, Oppo, Vivo and Honor. These are names you may not be familiar with, but Huawei and Honor made up 41% market share of all cell phones in China! Given China’s 5G smartphone sales made up 60% of total smartphone sales in Q4 2020, I would expect major tailwinds for Qualcomm, as a 5G chip specialist in the region.

Qualcomm’s Automotive segment is also a huge dark horse, the segment made up just 4.2% of revenue ($399 million) as of Q2 but they have a pipeline of over $16 billion! The company has partnerships with 26 global car makers such as BMW, GM, Honda, Volvo, Renault and even Ferrari. QCOM’s offers a “digital chassis” platform which enables these Automotive manufacturers to provide customers with connectivity, AI Features and eventually self driving technology features. The recently completed acquisition of Arriver should help to bolster this platform and it’s computer vision capabilities.

Qualcomm is also the first company to market a commercial Wi-Fi 7 solution for rapid connectivity. This is combined with the new Bluetooth 5.3 standard for two times the longer range.

The company has a smart strategy of leveraging their leading handset chip technology and then applying this to different markets. This leads to a large and growing Total addressable market [TAM]. Here is just a brief market overview:

Qualcomm chips are already powering Meta’s Oculus VR headset, Ray-Ban’s smart Sun Glasses and even Microsoft’s Hololens. Thus when the company says they have a $700 Billion market opportunity it is not unbelievable if they can capture a small segment of all these markets.

Qualcomm produced revenue of $11.2 billion in Q2,22 up 41% from the same quarter last year. This smashed prior guidance of between $10.2B and $11B for the quarter. Earnings per share came in at $2.57 and an EBT margin of 73% was produced which was above midpoint guidance.

The company is guiding for revenue of between $10.5B and $11.3B for Q32022, driven by strong handset and IoT growth. While Automotive revenue is expected to start to pickup from 2023 onwards, according to the company.

Analysing Qualcomm’s Gross Margin relative to competitors it is clear to see they have the 2nd highest at a fantastic 58.5%, this just behind Nvidia (NVDA) at 64.9%. This is a higher gross margin than chip manufactures such as TSM and Micron, which hover at around 45%. In addition, this is much higher than the handset providers Samsung and Apple, which have gross margins of 40.4% to 43.3% respectively.

In the trailing 12 months, QCOM generated $12.8 billion in operating income at a healthy 32% operating margin. They invested approximately $7.7 billion in R&D which is up from $5.9 billion in 2020. This is a good sign as usually companies with higher R&D spend tend to produce better shareholder returns in the long term.

QCOM also has a strong balance sheet with $12.4 billion in cash and just $2 billion in current debt. It is also great to see Qualcomm returning cash to shareholders via $1 billion in buybacks and $800 million being paid out in dividends (2.2% yield) in Q2.

In order to value Qualcomm I have plugged the latest financials in my discounted cash flow model. I have been fairly conservative with growth forecasts estimating “just” 10% growth per year for the next 5 years. I have also predicted their margins to maintain steady at ~36% which is still higher than the industry.

For increased accuracy I have also capitalised the companies R&D spend of ~$7.7 billion in the trailing 12 months.

Given these values I get a fair value of $218 per share, the stock is currently trading at $134 per share and it is thus ~39% undervalued. This is considerable but not surprising given the tech stock sell off.

I have also valued the company relatively by analysing the Price to Earnings [PE] Ratio and EV to EBITDA multiple relative to peers in the industry.

The EV to EBITDA multiple comparison also shows a similar story. QCOM trades at the 2nd cheapest with a EV to EBITDA (forward) of just 8, above Micron at 3.7 but much cheaper than NVIDIA at a sky high 26.

The Semiconductor chip market is vastly competitive and should a company such as Samsung decide to start using their own chips in more of their devices this would be a serious blow to Qualcomm. Apple is already preparing for the launch of their own modem chips, which will cut into Qualcomm’s modem revenue from 2023.

The Global supply chain has affected all businesses but most notably was the semiconductor industry. Qualcomm was “supply constrained” in Q42021 and had to supply chips based on the profitability of the handset market. This may lead other markets such as QCOM’s Automotive segment feeling left behind in the rear view.

Since February 2021, growth stocks had been sliced and diced thanks to high inflation and rising interest rates. Morgan Stanley predicts at least 6 interest rate hikes in 2022 alone. Higher interest rates, increase discount rates and compress the valuation multiples of growth stocks. Also Wall Street is being increasingly ruthless with tech stocks in general, one small slip and vast selling ensues. We have recently seen major declines in the previously “untouchable” FANG stocks, most notably Amazon, Meta and Netflix have seen huge declines. This volatility means there is plenty of opportunity in the market.

Qualcomm is a tremendous company and true leader in mobile handset chips, 5G and many new technologies such as IoT. Their large Automotive pipeline and number of partnerships mean this company has huge tailwinds ahead. This company is attacking a $700 billion market opportunity and I can’t see a reason why they couldn’t be the “next Nvidia” which trades at close to 4 times the market cap. The stock has high margins, is profitable, growing fast and undervalued. Thus this could be a great opportunity for the long term. The major risks are the revenue concentration with Samsung, the ruthless nature of wall street and the rising interest rate environment for growth stocks.